Utilize this Highest Common Factor of 4 Numbers Calculator to determine the largest common factor of given integers. All you need to do is simply enter the given four numbers in the calculator input box and hit the Calculate button to find HCF of 4 numbers quickly and display the output with detailed steps in less time.

Here are some samples of HCF of 4 Numbers calculations.

HCF of 4 Numbers Calculator: Solving the Highest Common Factor of four numbers is a difficult math problem for students. Not anymore without provided HCF of 4 Numbers Calculator. It helps students to determine the HCF of four numbers in a fraction of seconds. By just entering the inputs, it will display the result along with a detailed explanation. Apart from the illustrated solution, you can also learn the full concept about the Highest Common Factor of numbers by referring to the below provided definition, procedure to find HCF using various methods with enough solved examples. So, take a look at the further sections as well.

What does HCF Stand for? Procedure To Solve HCF of 4 Numbers Easily

HCF Stands for Highest Common Factor. HCF of a set of given whole numbers is the highest positive integer that divides equally into all numbers with zero remainders. It is also known as Greatest Common Factor(GCF), Greatest Common Divisor & Denominator (GCD). For instance, solve the HCF of a, b, c, d then the HCF is given by HCF(a, b, c, d).

You can determine the highest common factor of 4 numbers easily by using free online & handy tools like HCF of 4 Numbers Calculator or else solve the largest common factor for given four integers by hand with the help of various methods like given below. The methods that are supported to find out HCF of 4 numbers are as under

Check out the detailed procedure on finding the HCF using these three methods along with solved examples from the below modules.

How to Find Out HCF of 4 Numbers by List of Factors Method?

Go to the below steps & follow them properly to solve the HCF of given four numbers using the simplest method ie., Prime Factorization. The steps are as follows:

Detailed Step-wise process to determine the HCF of 4 numbers Using Euclid’s Algorithm is given here. Check it out & follow the steps properly for the largest factor of given numbers:

In step 1, we have to solve the largest number of two numbers and then we use its outcome with the 3rd number and then the result with the 4th one to find the Highest common factor of 4 numbers.

1. What is the abbreviation of HCF?

2. How to find the HCF of 4 numbers using a Calculator?

3. How to Solve the Highest Common Factor of Four Numbers?

You can solve HCF of 4 numbers by using four different methods as per the given numbers. Check out each of the methods of solving the highest common factor of 4 numbers from our page along with the detailed procedure and solved examples.

hcflcm.com is a reliable and genuine website that provides the best & free online calculator to determine the Highest common factor of four numbers with show work. 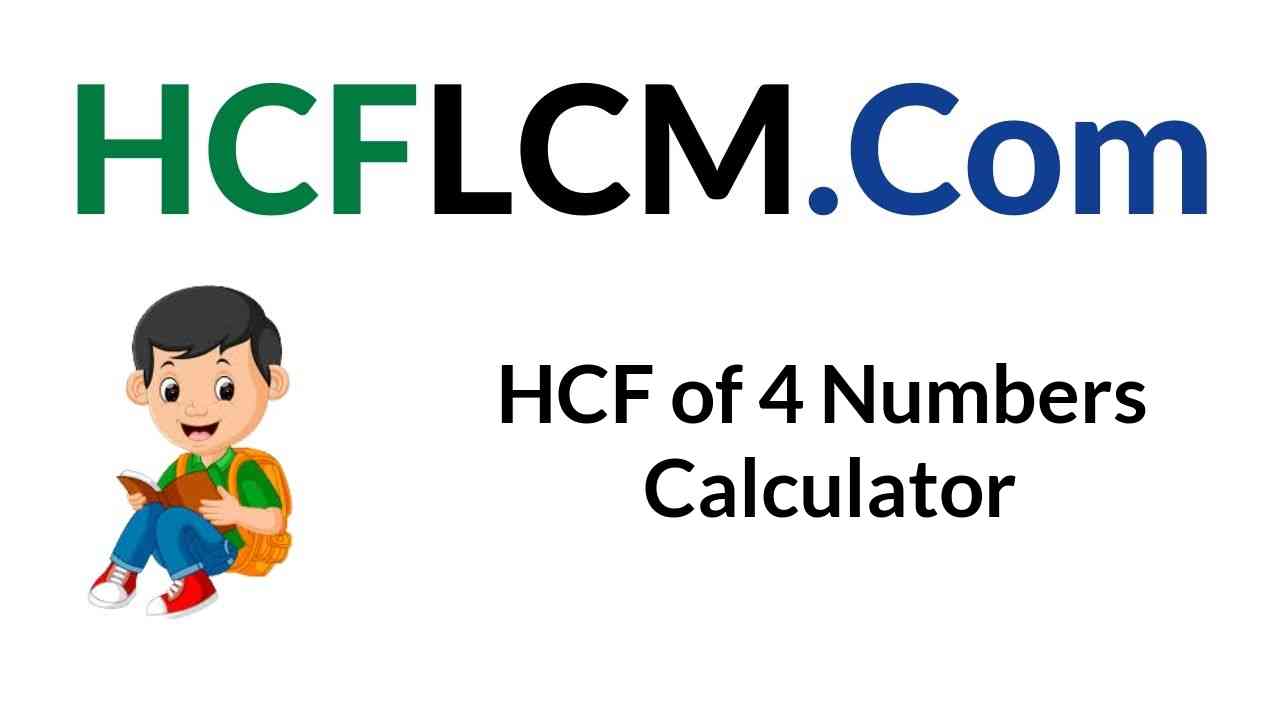